You might suspect that someone who purchases stylish homewares and treasures for a living would have a constantly revolving carousel of new pieces in their home.

But Tessuti owner Ali McIntosh says she gets her retail therapy buying things for her Jervois Rd store, and that her place, a first-floor apartment overlooking Ponsonby’s Western Park, is furnished by sentimental pieces that have been with her for up to 40 years.

There’s a large chest made from Irish pine purchased when she was 25. A collection of Max Thomson paintings. A foldable French wine-tasting table repurposed for dining, bought from a since-shuttered antique store.

“A lot of these pieces came from bigger homes from when I had my family but they’ll never leave,” says Ali, who intermingles them with timeless pieces from Tessuti, such as a rattan ottoman by mid-century Italian designer Franco Albini. “I’ll always make them work. They’re part of the fabric of my life.” 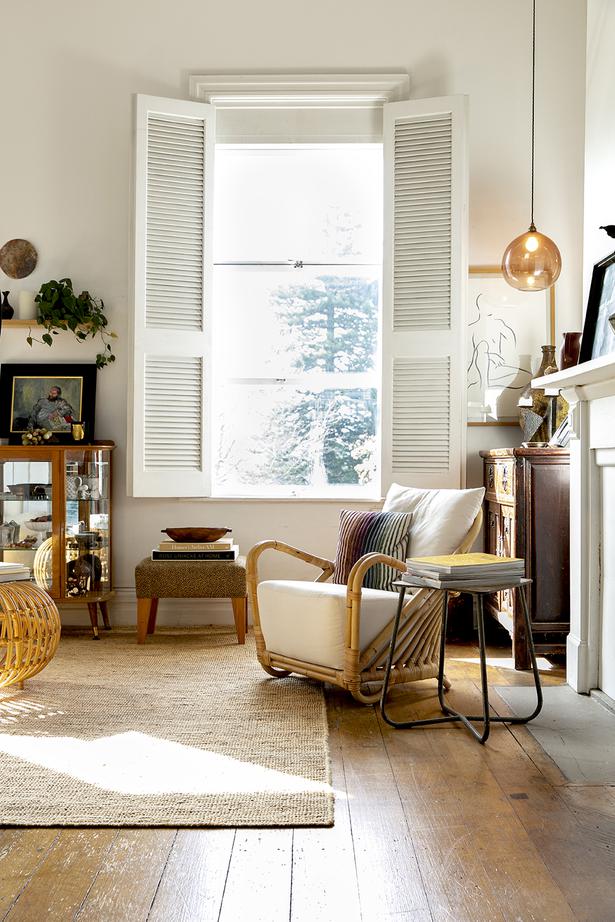 She fell in love with her place about six years ago. Originally it was an old mattress factory — and later, a film studio — but the first floor has always been residential.

“I was attracted to its New York feeling: the green-painted staircase [that leads to the first floor], the long brick wall, the original bathroom, and loads of natural sunlight,” she says. “Also it’s a great walking distance to the store.”

Although it’s petite, morning sunlight streams in through white European-style shutters, and unlike so many other homes in Ponsonby that look out on to buildings, Ali’s overlooks the park greenery, dappled light falling through oak and plane-tree leaves or winter branches, creating the illusion of space.

“I consider Western Park my back yard. It makes such a difference being able to look out over a lush, green space while still being so central. You don’t feel hemmed in like you can in some new apartments.”

With nature on her doorstep, it’s no surprise to find Ali is drawn to natural elements in the interior too, from the rawness of the brick to the warm tones of the wood floors, offset with a variety of textures, including a large jute rug from Nodi. 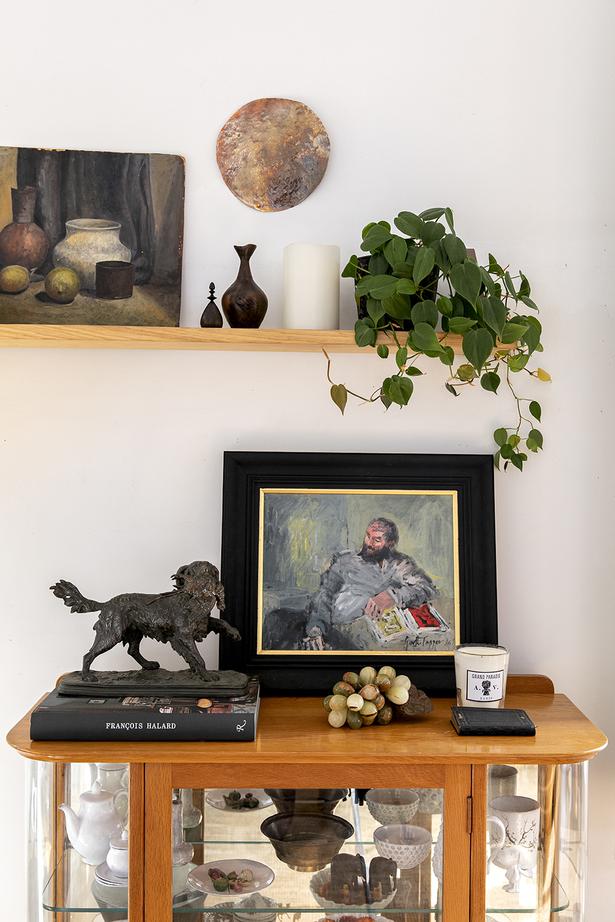 Peter Reid in His Studio, oil on board, by Garth Tapper, 1986. Photo / Babiche Martens

Among the worn-wood pieces and contemplative paintings is a diverse collection of ceramics inherited from her parents. Among them, an angular vase by eminent potter Len Castle, in which she’s placed a paper branch sculpture by Karin Montgomery from her recent exhibition at Anna Miles Gallery.

Ali says her parents originally became interested in New Zealand pottery in the 70s and were regular visitors to exhibitions. Otherwise the pieces she’s drawn to are those with a sense of history.

“Home is personal, so it has to be you… I like the old furniture and the wood gets a patina to it of course, over many hundreds of years of use… the wood often tells a story. It has marks on it or things have happened to it.”

Meanwhile her collection of artworks, though not consciously chosen for their connection to nature, reflects a love of landscapes. She has several pieces by Tessuti-represented artist and close friend Max Thomson, including one of Ali’s late dog Monty, a chocolate Labrador who loved to roam the vast park on his doorstep.

The painting on the mantelpiece is by Els Noordhof, a Dutch painter who lived in Dunedin, purchased by her parents at the John Leech Gallery in 1971. An evocative scene on the brick wall is by Auckland-based photographer and film-maker Greta van der Star.

When not curling up on the couch to read, Ali says she loves walking along Ponsonby Rd ​​to work, and all the activity her neighbor offers. 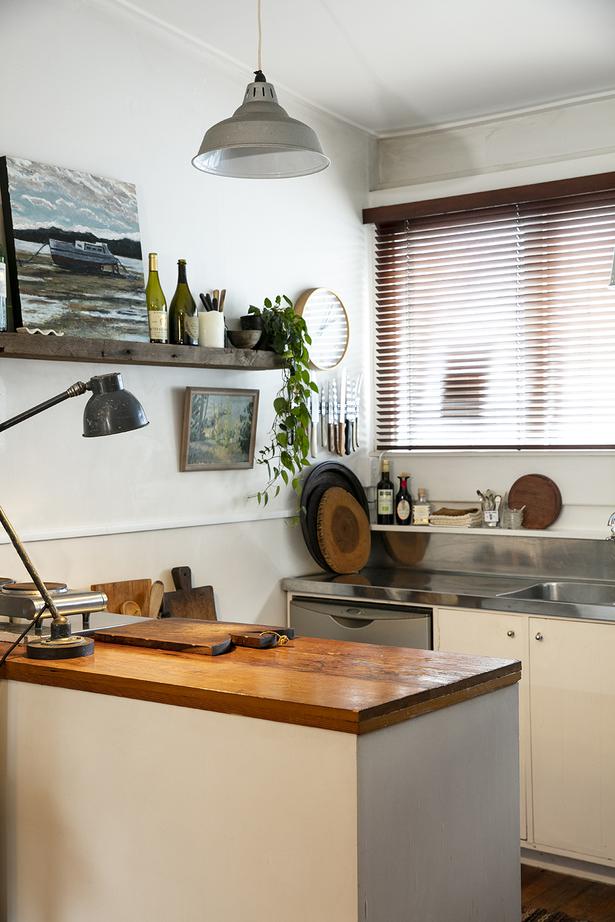 Cox’s Bay by Max Thomson, 2020, hangs on a shelf in the kitchen. Photo / Babiche Martens

“Orphans Kitchen is great for a breakfast catch-up, and Azabu is a favorite for an early dinner. Having said that, I also like to have people over and cook at home.”

One of her favorite projects is a film shot by Veronica Crockford-Pound for Tessuti, where 12 friends were invited for dinner, and Ali completely rearranged the apartment layout to make way for a long, candlelit table. “We had the best time,” she says. “I was in my element!”

Although new pieces infrequently find their way to her living space, she’s forever moving things around.

READ: Inside A Wellington Apartment Nestled In A Mediterranean-Inspired Village

“I really like a space I can reinvent. I quite like moving things around according to the seasons because the sun falls in different places, so you shift things around to make the room a bit more cosy.”

The couch is the latest to shift positions to catch the sun but small items are often mixed and matched too. Styling the nooks in her home is an intuitive process, says Ali, and often done on a whim, with “no rules”.

But If there’s one piece of advice she has for anyone living in a small space, it’s to find decent shelving. She’d be lost without her string shelving unit, designed in 1949 by Swedish architect Nils Strinning, home to books and objet d’art. Look for Light, 2020, by Henrietta Harris hangs above the table. Photo / Babiche Martens

“It’s really helpful in a small space because you can see through it… Shelving, particularly in a smaller space — there has to be a lightness to it. It can’t be bulky or heavy.”

The shelves in her office space are from Lyttelton-based maker Joska & Sons — Tessuti also stocks their mirrors.

“Owning Tessuti gives me a unique opportunity to meet with makers both here and internationally and many talented creatives in our local industry. Conversations with these talented friends keep me constantly inspired on many levels, not only design… the store really is an extension of my home,” she says.

It also gives Ali the chance to live vicariously, and right now she’s excited about a series of “exquisite” copper flowers by artist Erbavoglio Milano, using a French painting technique from the 1700s known as tole peinte. Some of the smallest pieces can take a full day to create, others up to a week.

Tessuti is also now stocking a new botanical-based skincare range called Monastery, developed by Athena Hewett. Athena is of Greek heritage, and calls on her grandmother’s holistic, healing recipes, producing the skincare in small batches at Monastery’s studio in San Francisco. It’s one of the few things Ali has recently brought home from the store, “an occupational hazard”, she says.

Unlike their counterparts on the East Coast, most galleries in Los Angeles don’t slow down or...

Art Industry News is a daily digest of the most consequential developments coming out of the art...

Doctor Strange in the Multiverse of Madness kicked off Marvel’s new round of programming in...

Stephen Curry wiggles his shoulders on my kitchen counter. No one cares, not even the most devout...